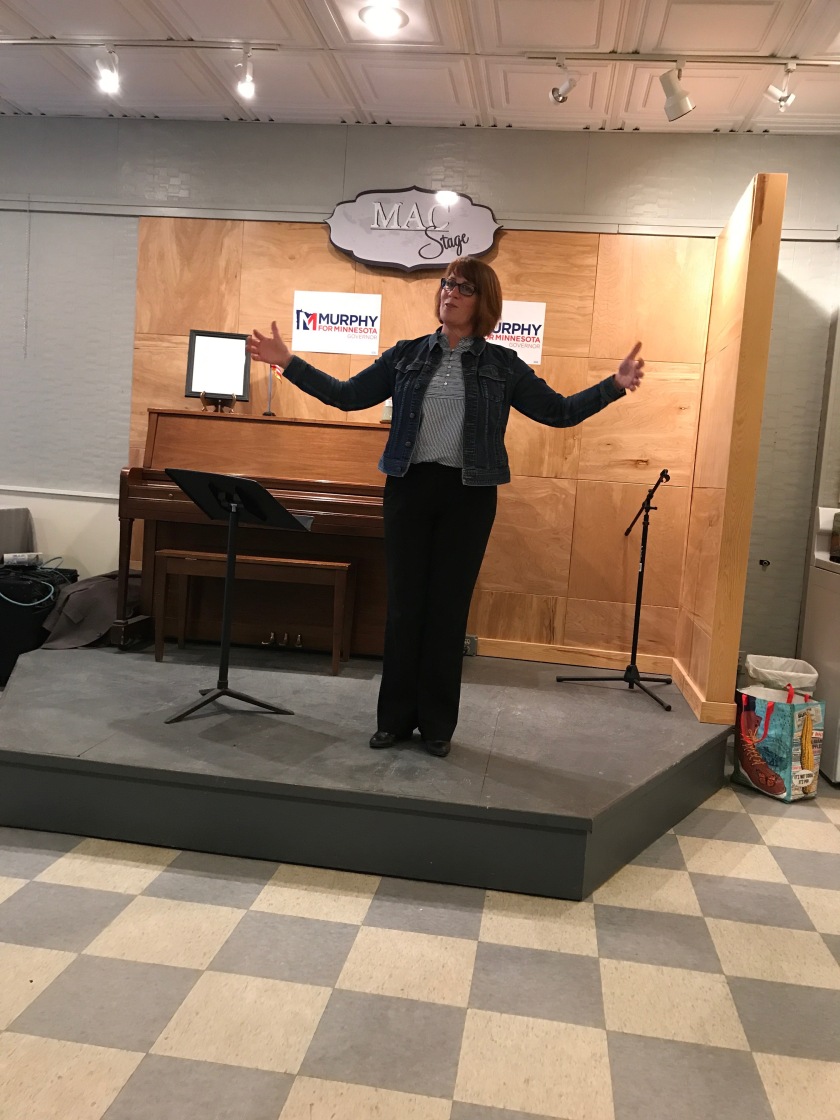 The DFL state convention is coming up this weekend and the delegates will hopefully endorse a candidate to run against the Republican candidate. These are my stories of why I support Erin Murphy for MN Governor.

First story. In March I and my friend Cathy testified before a committee in the MN, urged on and lead by Erin. It started because we had an idea for a bill that would address sexual harassment in the state legislature. Actually, we had a vision of a legislature that would be free of sexual harassment, so that women, and all people, could do their best work. Erin shared that vision, we learned. When we contacted her about our idea, she suggested we have a meeting.  Though we hoped for a response, what we didn’t expect was that she would jump in with both feet and help us.

But she did. She showed up. To be precise, we showed up at her office, but she was there to greet us 🙂  She listened intently, she gave us ideas, she connected us with experts, she collaborated. She was a leader. For this newbie activist, I was surprised, pleased, hooked.

Second story. My two brothers and their families live in central Minnesota, so I care about that quiet and frequently forgotten part of the state. I knew that Erin was always interested in meeting Minnesotans from all over the state, so I worked with my brother to schedule a “meet and greet” for her in lil’ ol’ Milaca, a sleepy town of about 3,000 just on the edge of “up north”, on the way to places like Brainerd, Lake Mille Lacs, and on the way to your cabin. It’s a place to work, and raise your families and farm and fish. It’s not a place that typically attracts candidates for governor.

But we asked, and Erin said yes. And then she showed up (thank goodness, but we knew she would). It was a small but engaged gathering and from what I observed, as an outsider,  she spoke to almost everyone, she asked questions, she paid attention. And she told the people gathered why she wanted to be governor, how she could help them, and asked for their support. She showed up. In Milaca.

I could tell you about her progressive positions and voting record, and her life experience, and her legislative experience, but you can look those up. I could tell you that she’s in politics to make people’s lives better, but I think I just showed you a little bit of that. And I am telling you that she believes we all do better when we all do better.

If you’re an undecided delegate to the convention, I will be on the floor volunteering for Erin, and hoping to convince you to support her too.  And if she gets the endorsement, I know all of you MN voters will support her too. She’s the best candidate, and will be the best governor. Now let’s get to work.