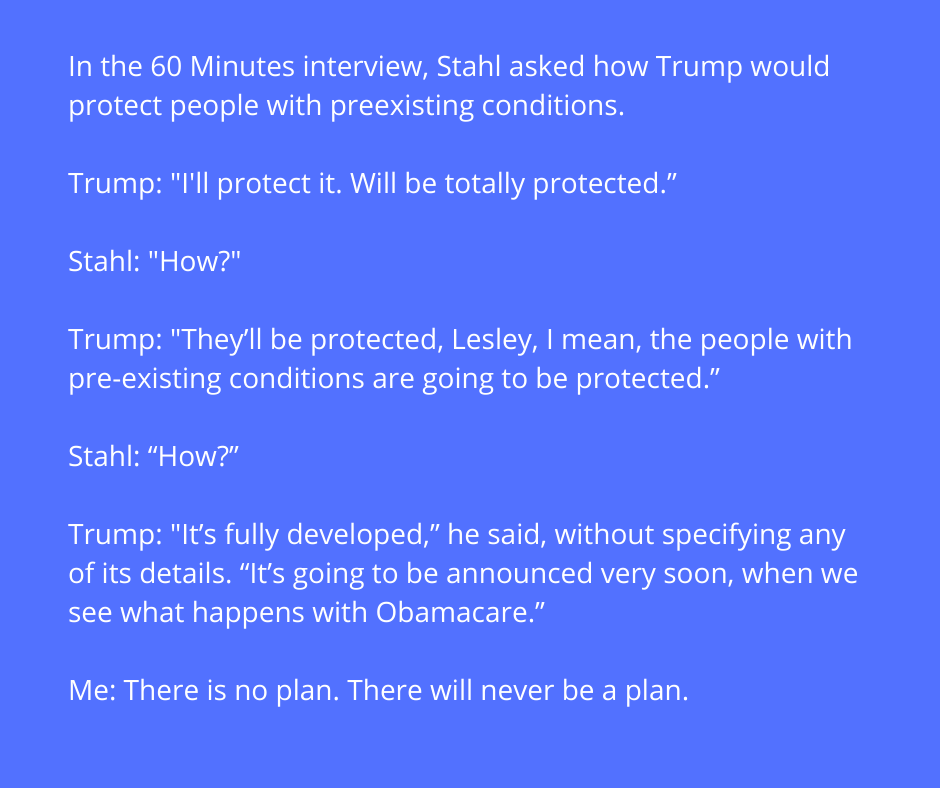 Of course I’ll accept the paternalistic “protections” that politicians are scrambling to promise people like me, people with “pre-existing conditions”, but what I really want is quality, affordable healthcare. For all of us.

I’m not a one-issue voter, but healthcare is one issue that is personal to me. I have a chronic medical condition, Type 1 diabetes, that I not only have to manage every day, but which puts me at high-risk if I get Covid (wear a mask, please).

Along with millions of Americans, I would be uninsurable without the ACA, or insurance would likely be priced out of reach for me.

In January 2017 Trump promised better and cheaper healthcare, and he’s continued with those promises for 4 years. What a concept. I want that. But there is no plan, and there will be no plan, just like there is no plan to manage the pandemic which has killed over 220K Americans, a healthcare crisis which has put 8.9 million Americans at risk of becoming pre-existing conditions.

We would not be here if Hillary Clinton was president. By “here” right now I mean we would not be in the middle of a health crisis unlike any we’ve seen in a century, and we wouldn’t be faced with our own government arguing before the Supreme Court that they should repeal the Affordable Care Act (Obamacare), the law that was passed for us, the people, the law that 70% of Americans want to stay intact. I’m sure Hillary’s chief of staff would not be saying that the pandemic is uncontrollable so they’re just going to give up on it and offer up thoughts and prayers to those working on a vaccine. Joe Biden will not give up either.

Elections matter. I’m voting for Democrats because they are the ones who not only believe deep down in their souls that taking away healthcare in the middle of a pandemic is cruel, but they also believe that we should make our healthcare system better.

On the other hand, Trump wants to give us better healthcare so badly, so strongly, so perfectly, that now, 3-1/2 years later, I can hand you a laundry list of his healthcare triumphs:

Does this sound like someone who is actually working on a plan?

This is not a guy with a plan, unless you call taking away healthcare and letting people die a plan.

[If you want to see what a plan actually looks like, check out Joe Biden’s plan]

Prior to the ACA, employers had the right to deny coverage due to “pre-existing conditions.” This wordy moniker applies to me.

If you have a pre-existing condition it means you had an illness or condition that existed before you tried to buy that overpriced and inadequate insurance  policy.

Having a pre-existing condition was a very handy way for insurance companies to turn you down, deny your claim, jack up your premium. It is an insurance term, not a medical diagnosis, a construct invented because our healthcare system is largely still based on insurance, based on denying people coverage in order minimize risk to increase profits. That’s how insurance works.

The ACA prevented insurance companies from denying coverage to people with pre-existing conditions, which made the system less cruel. That was a good thing. The other good things that came with the ACA were Medicaid expansion, elimination of lifetime caps, basic coverage that every insurance plan had to include, and allowing parents to cover their kids until age 26.

And now the pubic discourse is all about “protecting people with pre-existing conditions”, instead of how we’re going to make our healthcare system better for everyone, whether you have a chronic illness, need birth control, a vaccine, an annual physical or are having a baby, or have had a heart attack, or Covid. Can’t we just have healthcare?

Trump tweeted on October 5: “Don’t be afraid of Covid. Don’t let it dominate your life.”

Trump and the GOP are trying to convince us that they have a healthcare plan hidden in a vault somewhere, and we should trust them. Don’t believe them. The evidence speaks for itself, plus the theory of government under Trump, if you can call it a theory, is that he matters and you and I don’t.

But elections do still matter.

I voted (already, you should too) for Democrats up and down the ballot because I believe that healthcare is a human right, not just a privilege afforded to the rich and strong and lucky. Democrats are the only ones on your ballot who will try to preserve the healthcare we have, and work to make our flawed healthcare system better.